No Widgets found in the Sidebar Alt!

American handball, known as handball in the United States, is a sport in which players use their hands to hit a small rubber ball against a wall such that their opponent cannot do the same without the ball touching the ground twice. The three versions are four-wall, three-wall and one-wall. Each version can be played either by two players (singles), three players (cutthroat) or four players (doubles), but in official tournaments, singles and doubles are the only versions played.

In Treacherous Beauty, by Mark Jacob and Stephen H. Case, about the Arnold-Andre conspiracy, Major John Andre and General Sir Henry Clinton are said to have played a game called handball during the American Revolution. The earliest record of the modern game in the United States mentions two handball courts in San Francisco in 1873.[1] The sport grew over the next few decades. By the early 1900s, four-wall handball was well established and a one-wall game was developed in New York City by beach-goers who hit bald tennis balls with their hands against the sides of the wooden jetties that lined beaches. This led to a rise in one-wall handball at New York beaches and by the 1930s, thousands of indoor and outdoor one-wall courts had been built throughout the city.[5] American handball is seen predominantly in parks, beaches, and high school yards in New York, Chicago and other large urban areas.

National championships in handball have been held annually in the United States since 1919. These championships were organized by the Amateur Athletic Union (AAU) until 1950, when their control was transferred to the newly formed United States Handball Association (USHA).[6]

Influence on racquetball and wall paddleball 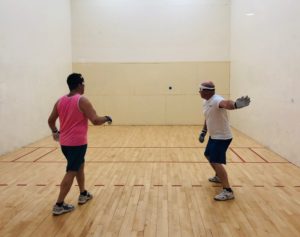 Do you want to be part of this group or experience this sport?
Contact Charles at (302) 752-8203 if you do not have equipment
we provide the gloves and the ball